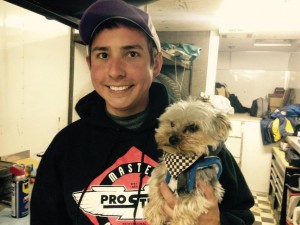 Crystal, MI – (April 25, 2015) – Ryan Ruhl was able to take advantage of another competitors misfortune to win Saturday night’s Engine Pro Sprints on Dirt presented by ARP feature Saturday night at Crystal Motor Speedway. Ruhl and Brad Lamberson raced for the lead throughout the second half of the 25-lap feature before Lamberson was able to pull away. While coming down for the white flag Lamberson’s engine expired and Ruhl surged into the lead and went on to take the victory.

“I guess if you do this long enough you can only be so unlucky, I really feel for brad, he had a good race going. I feel terrible it had to end like that.”

Shawn Dancer and Lamberson started on the front row and raced side by side for the lead on the opening lap with Lamberson taking the point. Lamberson held the top spot when Mike Burns brought out the caution flag with four laps in. Lamberson was able to pull away from Dancer during the restart while Dancer had to contend with Andy Teunessen challenging him for the second spot. Behind them Ruhl and Dustin Daggett were working their way up from starting 7th and fifth respectively racing for fourth position. Ruhl took the fourth spot from Daggett and then closed in on the lead trio.

Just as the leaders were getting into traffic and Lamberson appeared to be boxed in Burns brought out another caution flag when he slowed on the track. This allowed Lamberson an open track while Ruhl and Dancer races for second spot.

Lamberson pulled away again during the restart while Ruhl was able to slide in front of Dancer between turns one and two. Lamberson continued to pull away until a caution flag appeared Kyle Pitts spin in turn four. Geibe had to take evasive action and bounce off the wall to avoid contact with Pitts. Both drivers were able to restart.

This setup the lead battle over the final eight laps. Ruhl dove to the inside of Lamberson in turns one and two during the restart, but could not make the pass. Daggett started to make a late race surge moving into third with five laps to go as Ruhl closed in on Lamberson.

Even with Ruhl and Daggett quickly closing Lamberson appeared to have everything under control until coming off turn four for the white flag Lamberson’s car lost power. Ruhl surged into the lead and held off Daggett on the final lap for the victory. Dancer, Chase Ridenour, and Teunessen rounded out the top five. Lamberson dropped back to 16th. 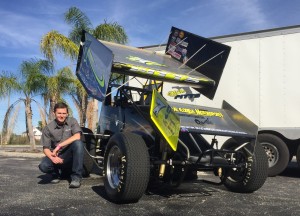 Central Florida Motorsports is proud to announce that Kyle Pitts will be travelling back to Michigan for the 2015 Sprints on Dirt Season. Following a strong performance in the 2014 where Pitts achieved Rookie of the Year honors as well as a 3rd place in year end points.

In less than a week Pitts will be at Crystal Motor Speedway in Crystal Michigan, for the Season Opener. April 25 will be the start of the 20 race season that will travel throughout Michigan, Ohio, Indiana and end in Ontario Canada with the Canadian Sprint Car Nationals.

“I’m really excited to have the opportunity to go back to Michigan and build on what we have accomplished last year. We had some strong finishes but couldn’t make it to victory lane. This year we are looking to change that.”

CFM is proud to announce the addition of `Game On’ Outdoor Gear, Wix Filters, JE Pistons, and Sheldon Farms to the team for the 2015 Sprints on Dirt Season.

To get more information about Kyle Pitts and Central Florida Motorsports follow on social media; Facebook.com/KylePittsRacing as well on Twitter @KPitts7, in addition to updates on the race weekend at www.KylePittsRacing.com

Tires available at Crystal, LR requests must be in by Monday

Davidson, MI — (April 19, 2015) — Engine Pro Sprints on Dirt presented by ARP officials will have tires on hand for the season opening event at Crystal Motor Speedway. Spec right rears will be picked up. If anyone wants specific left rear tires they want please let series directory Adrianna Irwin know by Monday. Specific requests can be send via email to director@sprintsondirt.com or by phone at 810-240-1789.

Fenton, MI — (April 12, 2015) — The Engine Pro Sprints on Dirt presented by ARP is pleased to announce that Adrianna Irwin has accepted the position Series Director.

Adrianna, a degreed mechanical engineer, is a global program manager in the automotive industry. She is experienced in managing complex relationships and productive communication with people with varying agendas and different perspectives.

Management of an organization like SOD is no easy job, but Adrianna’s professional background and accomplishments makes her well qualified to meet the demands of the job.

From a racing perspective, Adrianna is also very experienced and knowledgeable. She has been involved with sprint car racing all her life, the third generation of a racing family. She has seen it all and understands the intricacies of the sport.

You can email Adrianna at director@sprintsondirt.com.

The 2015 Engine Pro Sprints on Dirt presented by ARP rules are now posted on the website. Click this story on the menu link above to view them.