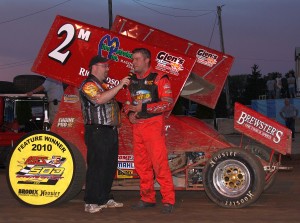 Ionia, MI. – (Friday July 23rd, 2010) – Dustin Daggett made history Friday night at the Ionia Fairgrounds with the Engine Pro ASCS Sprints on Dirt presented by ARP. Daggett scored the 71st ASCS SOD feature win of his career, tying him with the Hank Lower for the most feature victories in series history. Daggett set the record by completely dominating the Ionia Free Fair program sweeping the heat race, dash, and feature event victories.

“It feels great to tie the record and finally get a win (at Ionia),” said Daggett. “We finished second the first two times here, and I wanted to win in from of my family and friends.”

Joe Bares and started on the front row with Ryan Grubaugh. Bares took the lead and held on through the first three circuits. Daggett immediately got second from Grubaugh and went after Bares for the lead. Daggett held right into Bares back bumper until making the pass on lap four. From there Daggett checked out to what ended up being a half lap lead at the finish

Bares then had to hold off repeated challenges for second from Grubaugh. Eventually Grubaugh made the pass,but Bares passed Grubaugh returned the favor down the backstretch to maintain second spot Another attempt at taking away second position cost Grubaugh third when Gregg Dalman took the position on the final lap.

Daggett dominated the non-stop 25-lap feature. Bars, Dalman, Grubaugh, and Ben Rutan rounded out the top five. Rutan was the only driver other than Daggett to win an event during the evening, winning the second heat race.